About Kennedy Half Dollars

Ever wonder why you don’t see many well worn Kennedy Half Dollars? Since these coins were released right after John F. Kennedy was assassinated, many of them were taken out of circulation, and stashed by consumers. 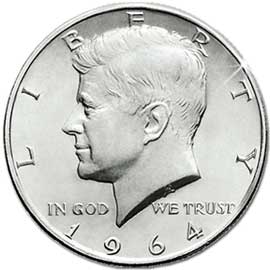 From 1971 to present circulated Kennedy coins are simply clad coins (no silver) that have little value except the 50¢ fiat value (fiat means by order of) the government says they are worth.

If you need to sell Kennedy coins, other silver coins, gold jewelry, silver, platinum, or any precious metals, just call Greg today at 928-710-2137. I’ll meet with you on your schedule.
i work by appointment Monday through Saturday

I serve the communities of Prescott, Chino Valley, Prescott Valley, Camp Verde, Cottonwood, Surprise, Payson, Wickenburg, Cave Creek, Anthem, Phoenix, Wittman, and Sun City, Az. if you are in or visiting Prescott, just stop by to sell your gold.